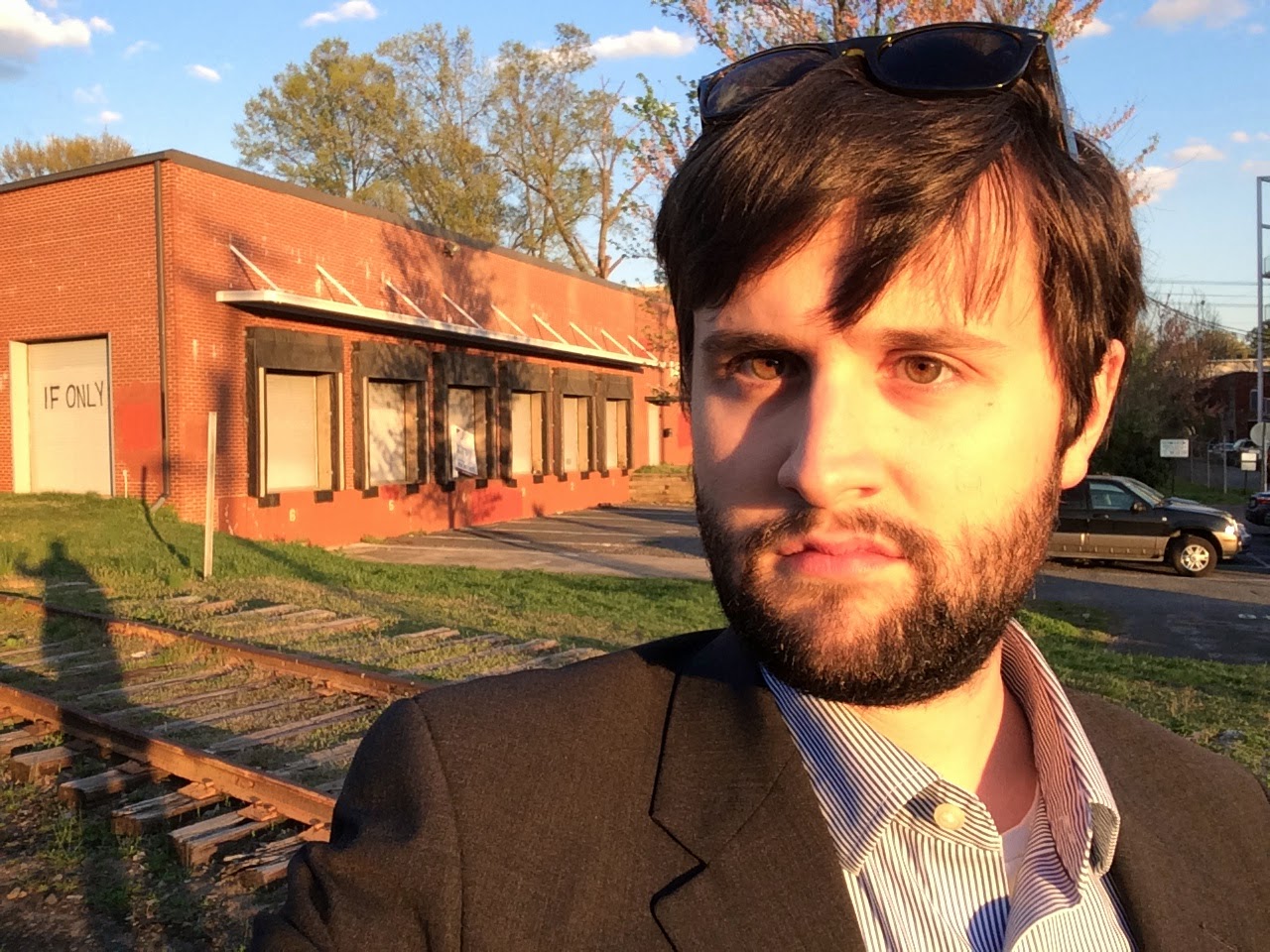 It is with a hefty cardiac organ that I announce my decision to discontinue The Loading Area. After 14 posts and nearly two years, I believe I've said virtually all I can on the dear subject of loading docks. To continue to post would be purely ego-driven and would only diminish the blog as a whole. When I started TLA in August 2012, I felt my efforts would be worth it if I could get just one individual excited about loading docks. And I did get one individual excited--myself. Through this process of chronicling and celebrating loading docks in Boise and points beyond, I learned the important lesson that the only person I really have any semblance of control over is myself. Although I'm reasonably certain I've changed the world to some degree in my capacity as a Kreationist, the humble, unassuming docks I've sought out have taught me to be mindful and set personal boundaries regarding what I am and am not responsible for.

But enough about me. At this time, I'd like to extend a sincere "thanks" to those few but fervent dockheads who have supported me these past 22 months. I'd also like to say that, although the blog is over, the fun isn't--The Loading Area will remain live indefinitely as a sort of loading dock e-museum for any and all who want to explore it for years to come.

Finally, I want to ballast the sentimental tone of this final post with an exciting announcement. As of yesterday, I am embarking on a new project--Boise Splits. BS, like TLA, is a look at phenomena on the urban/suburban periphery--only this time I'll be looking at small, split-entry office buildings erected in the 1960s and 1970s. I intend to employ an un-embelished, more academic tone in this new blog project. I hope you follow it! Should be as fascinating as it is unprecedented.

As much as I want to keep writing to prolong the inevitable, it's time to call it quits. In true Loading Area fashion, I leave you with this melancholy yet hopeful pic: 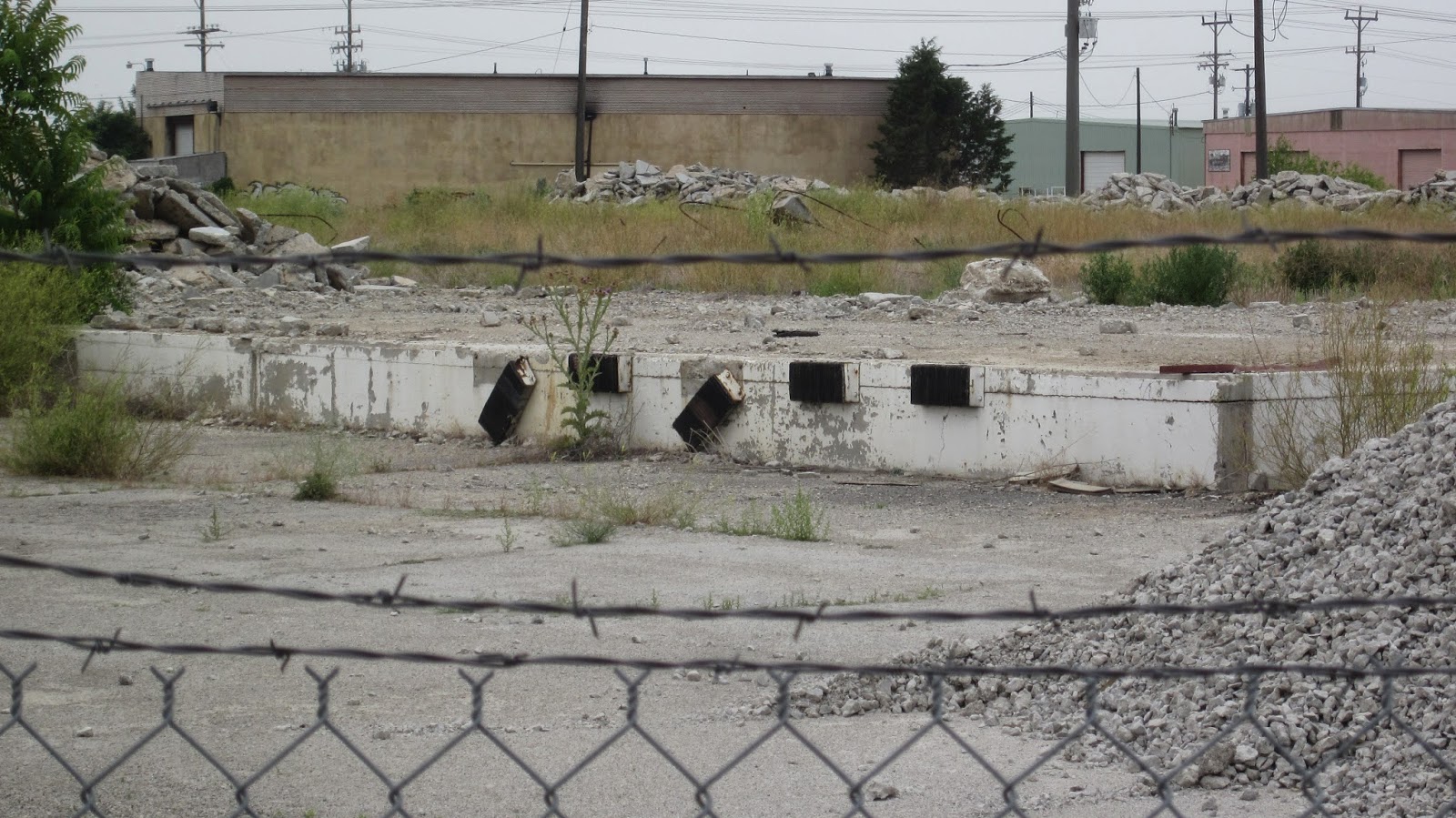 A ruined warehouse on Apple Street, just off Federal Way in Boise. All that remains are the truck-height foundation and safety bumpers--an injured but discernible loading dock, standing defiant amid the swath of time's wrecking ball. Truly an enduring image of optimism in an uncertain universe!
Posted by Chris Peebles at 10:14 AM 1 comment:

Today's featured loading dock is actually not a loading dock at all. In fact, I use this image to clear up any confusion over what constitutes a dock and what does not. Although the specimen pictured below conveys the phenotype of a loading dock upon cursory observation (even more so than previous examples deemed docks), a closer examination reveals a glaring automatic disqualifier: an at-grade seam between door and floor, rather than the requisite truck-height configuration. Also, few if any of the accouterments required to safely load and unload freight are present: no bumpers, no leveler, no seal, not even a rudimentary truck restraint system. Very likely, this gateway (and it's apparently vacant parent structure, for that matter) was never involved in the intended purpose of storing and transferring large quantities of goods at frequent intervals. The building seems to fit more into the profile of a commercial shop (probably an automotive servicing facility) and the door simply a means to protect the bay within from the elements, climatic and otherwise. To be blunt, it's a garage. Though a venerable portal in its own right with undoubtedly many stories to tell, it is simply NOT a loading dock. 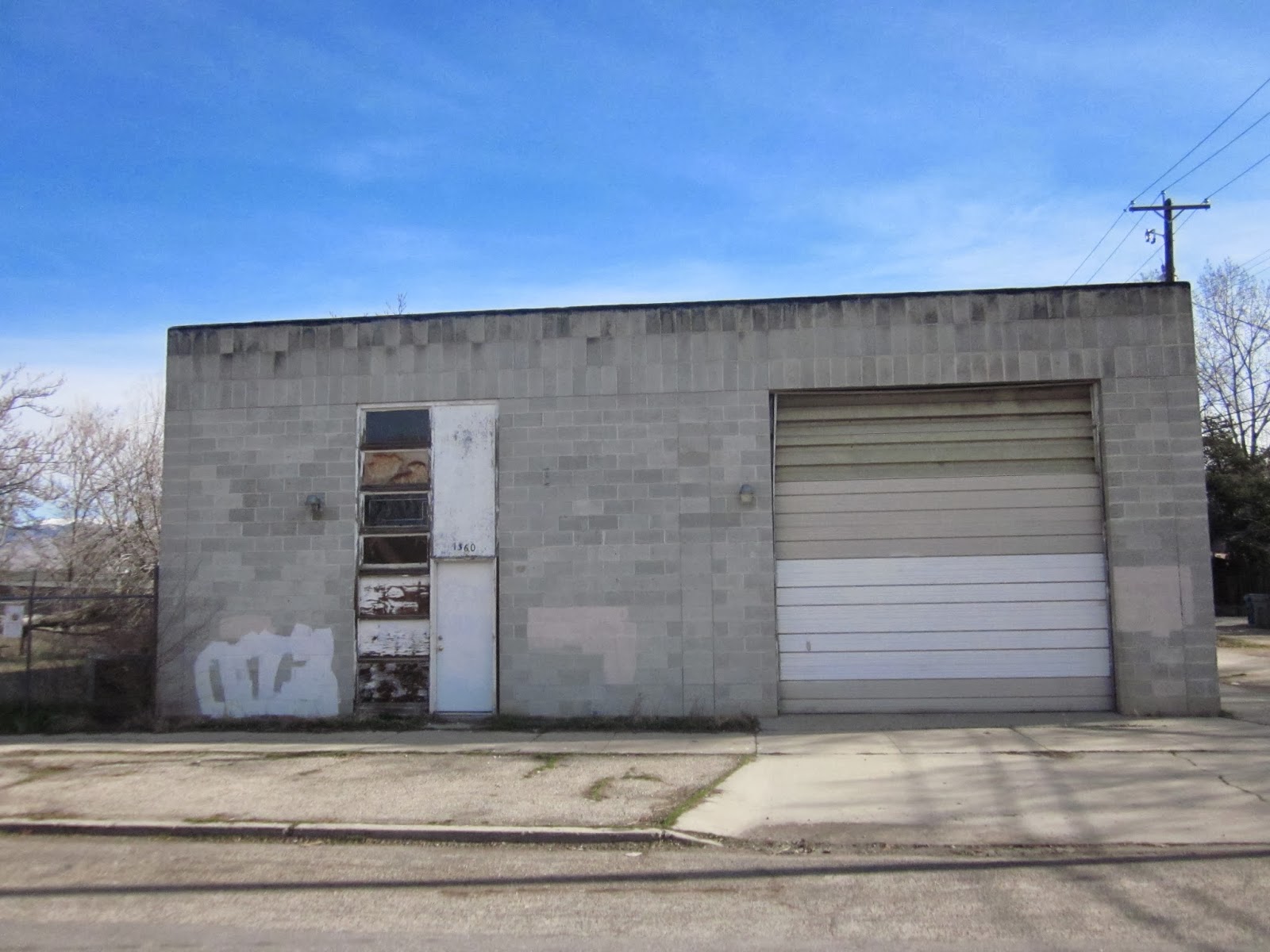 The large overhead door on the right side of this cinder block edifice on Grand Ave in Boise is decidedly not a loading dock.

Reflection: Why did I present to you this non-dock? You may wonder, as I often do, can't anything be a dock? Isn't everything just matter? Just part of a single universe? Are we, then, ourselves loading docks and they us? Of course! But for language to function (though perhaps imperfectly) as a means of communication and relation to one another and to our surroundings, we need to put our proverbial foot down every once in a while to draw a distinction between that which is a loading dock and that which is not. Without the establishment of varying typologies such as these, we would likely be adrift in a plane devoid of contrasting sensory stimuli. It could very well be that this void is serene and spurs pure contentment. Maybe this is what death is. But in life, I don't find this prospect terribly interesting or fascinating. Hence, this post. Thank you.
Posted by Chris Peebles at 8:40 AM No comments:

Although the primary mission of The Loading Area is to celebrate and venerate loading docks, there has been a fair bit of lamentation over the past year and a half. As much as I feel tempted to paint an idealized picture in which docks are never neglected, abused or destroyed, the world just doesn't work that way. Were I to gloss over the ugliness and bleakness within the dock saga, my deceit would be a grave disservice to my readers, myself and, most importantly, to loading docks themselves. But what good does it do to languish in the melancholy morass? If one assumes the positive tip, an examination of what happens to a loading dock in its afterlife can be a stimulating intellectual exercise. 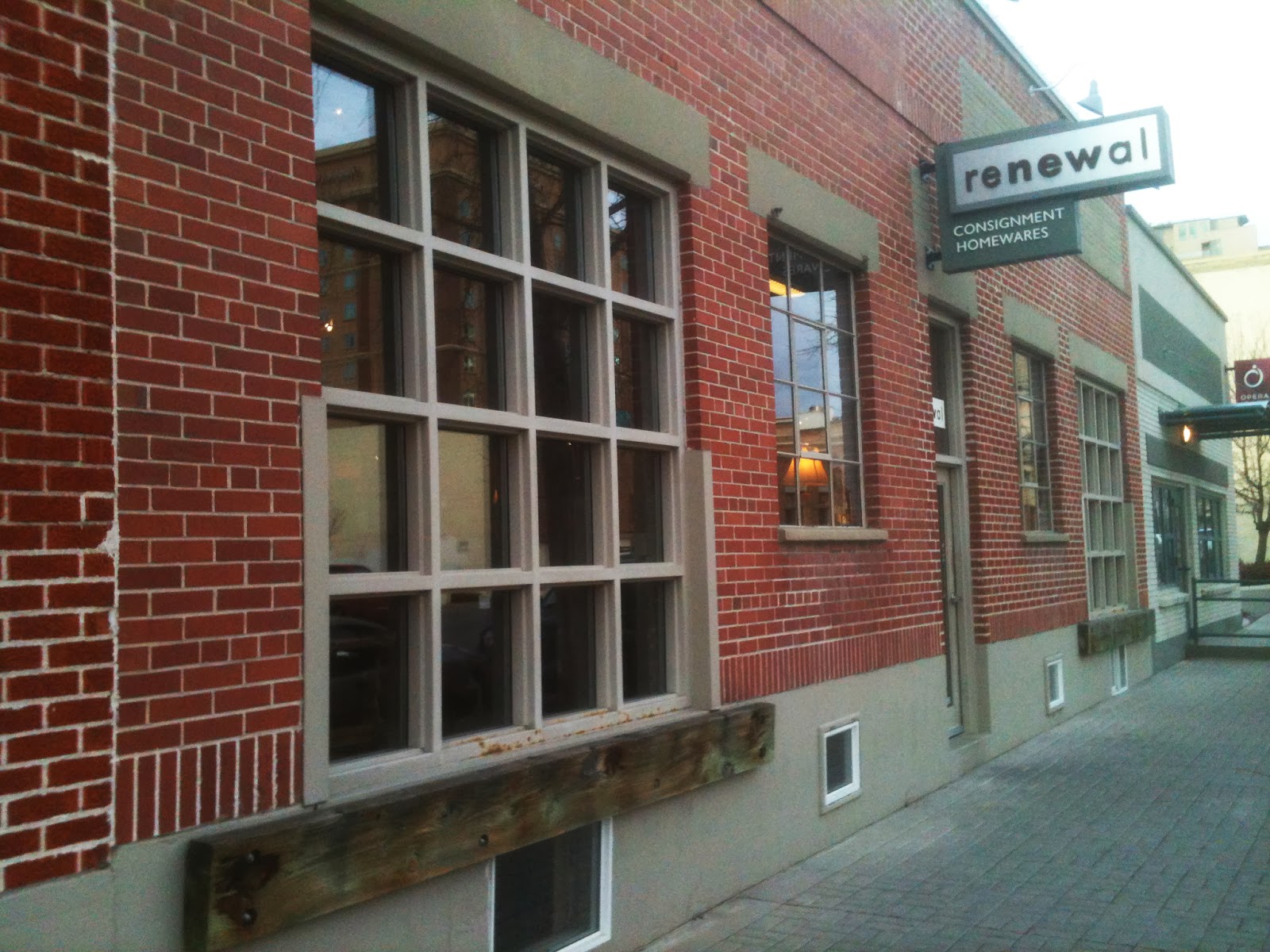 Loading docks realigned as windows for an aptly named retail establishment at 8th and Fulton. The bolted-timber look harkens back to a day before standardized seals, levelers and other contemporary safety features 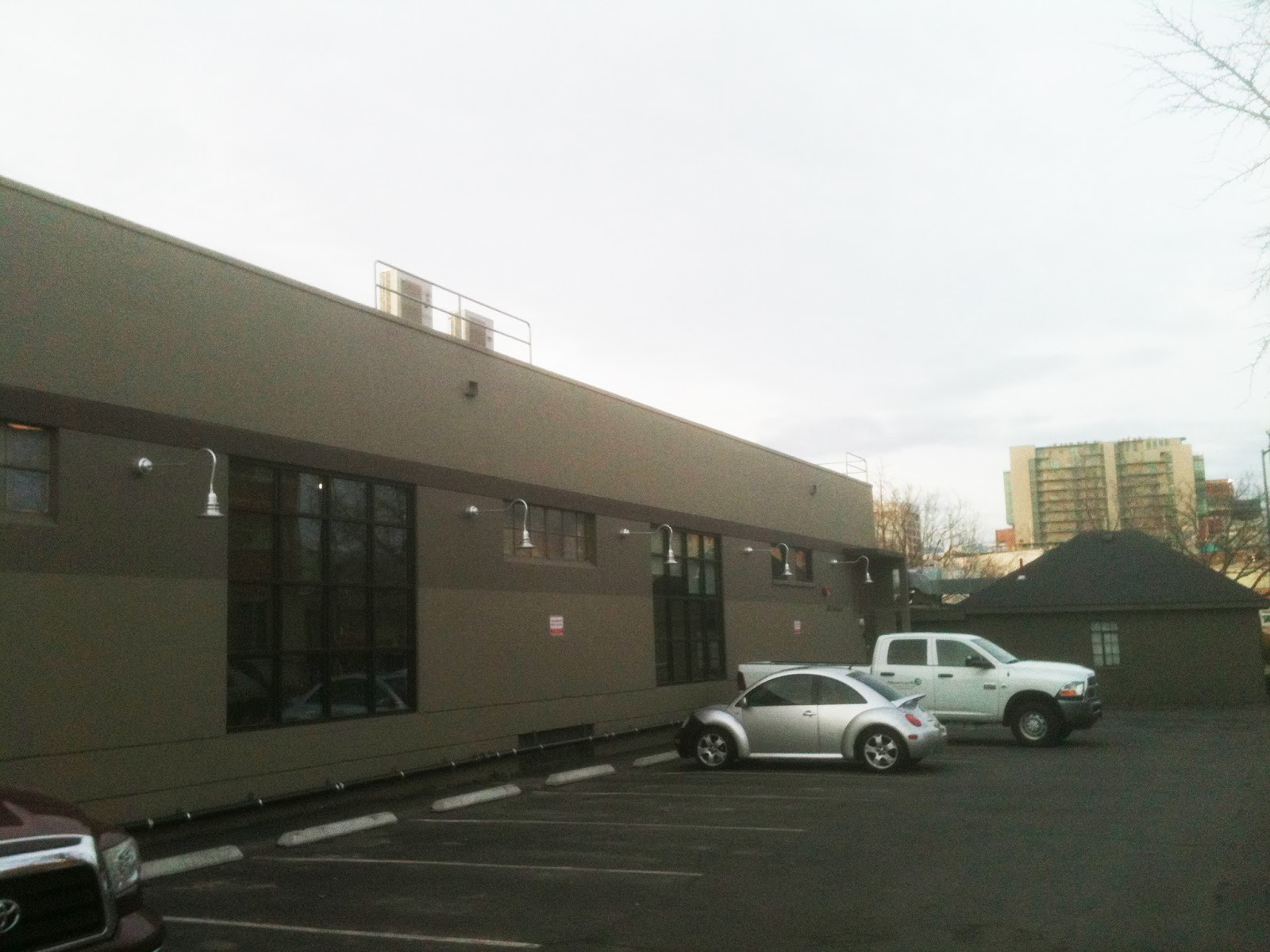 Walk a few blocks south and you'll find this an almost-mirror image. Refurbishing antiquated warehouses and replacing their loading docks with 16-panel floor-to-ceiling windows appears to be the modus operandi for Boise's 8th Street Cultural District. 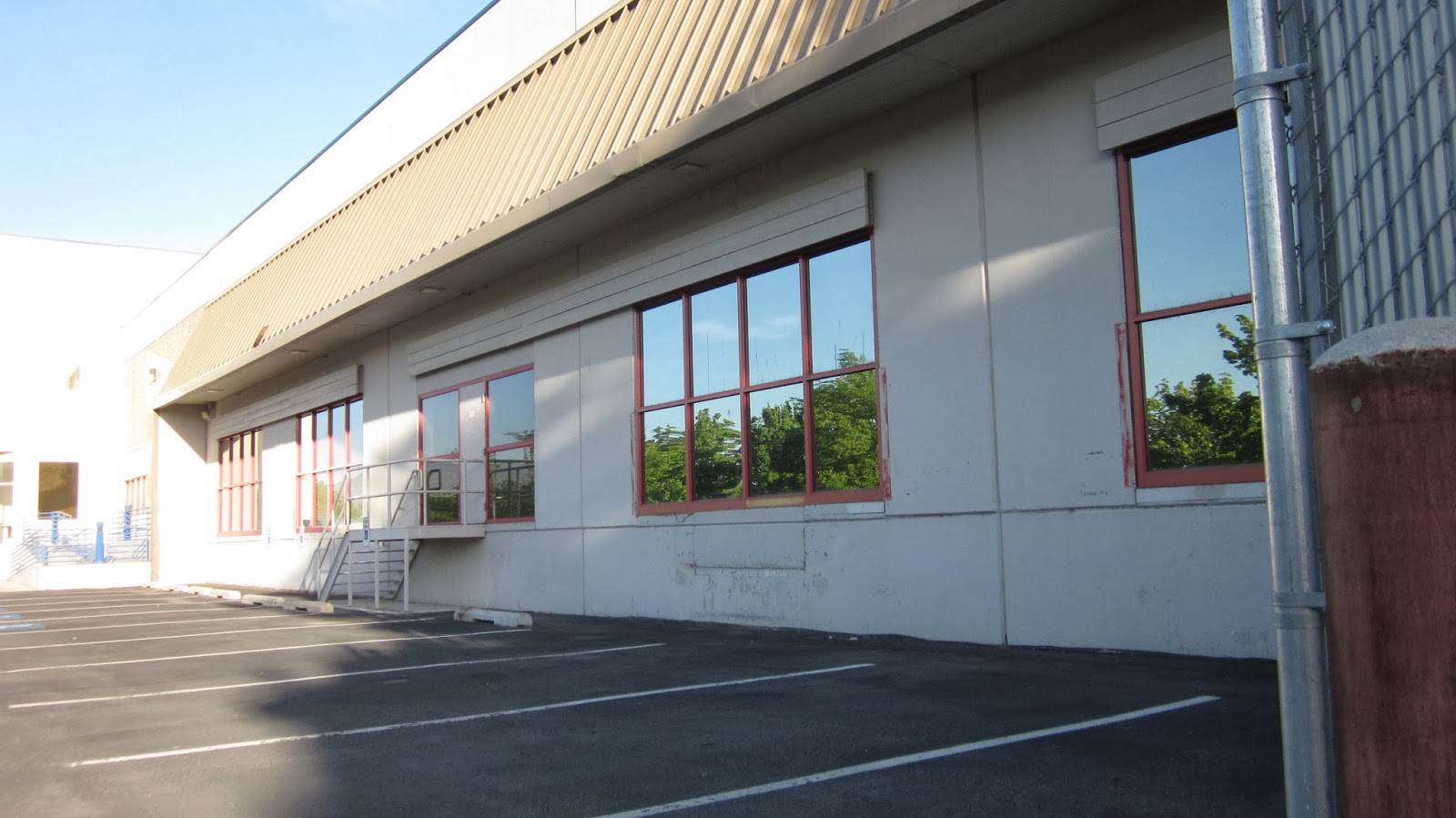 Erstwhile loading docks/current windows on Westpark Street. Are we beginning to notice a pattern here? Is it as if the plane where goods (and ideas, perhaps) once moved freely in and out is now but a double-paned barrier where all one can do is gaze longingly through at what cannot be grasped? I ruminate on such matters at length. 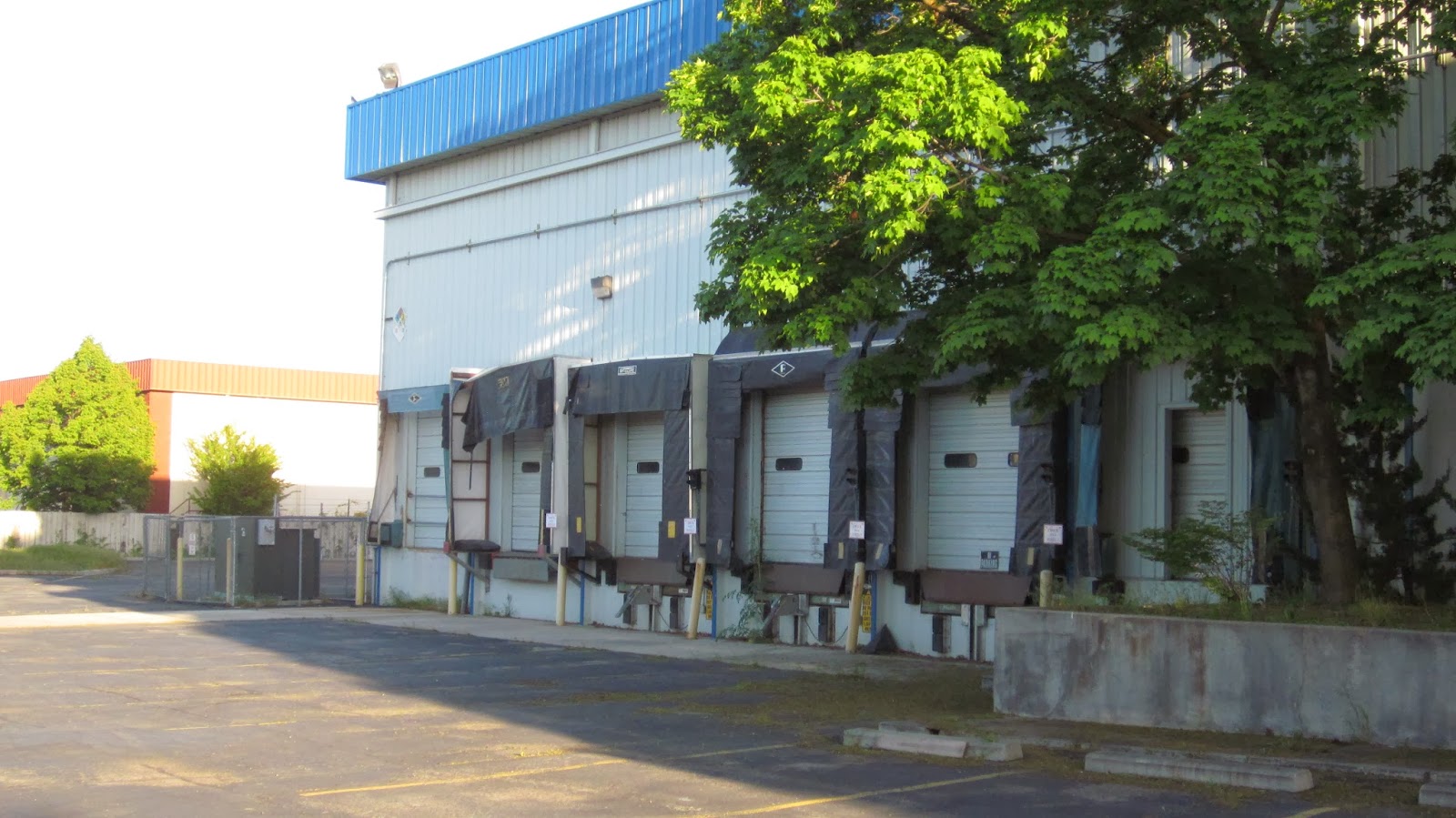 An esteemed, if a bit unloved, row of docks at the confluence of Westpark and Steelhead Way. Image dated May 2012. 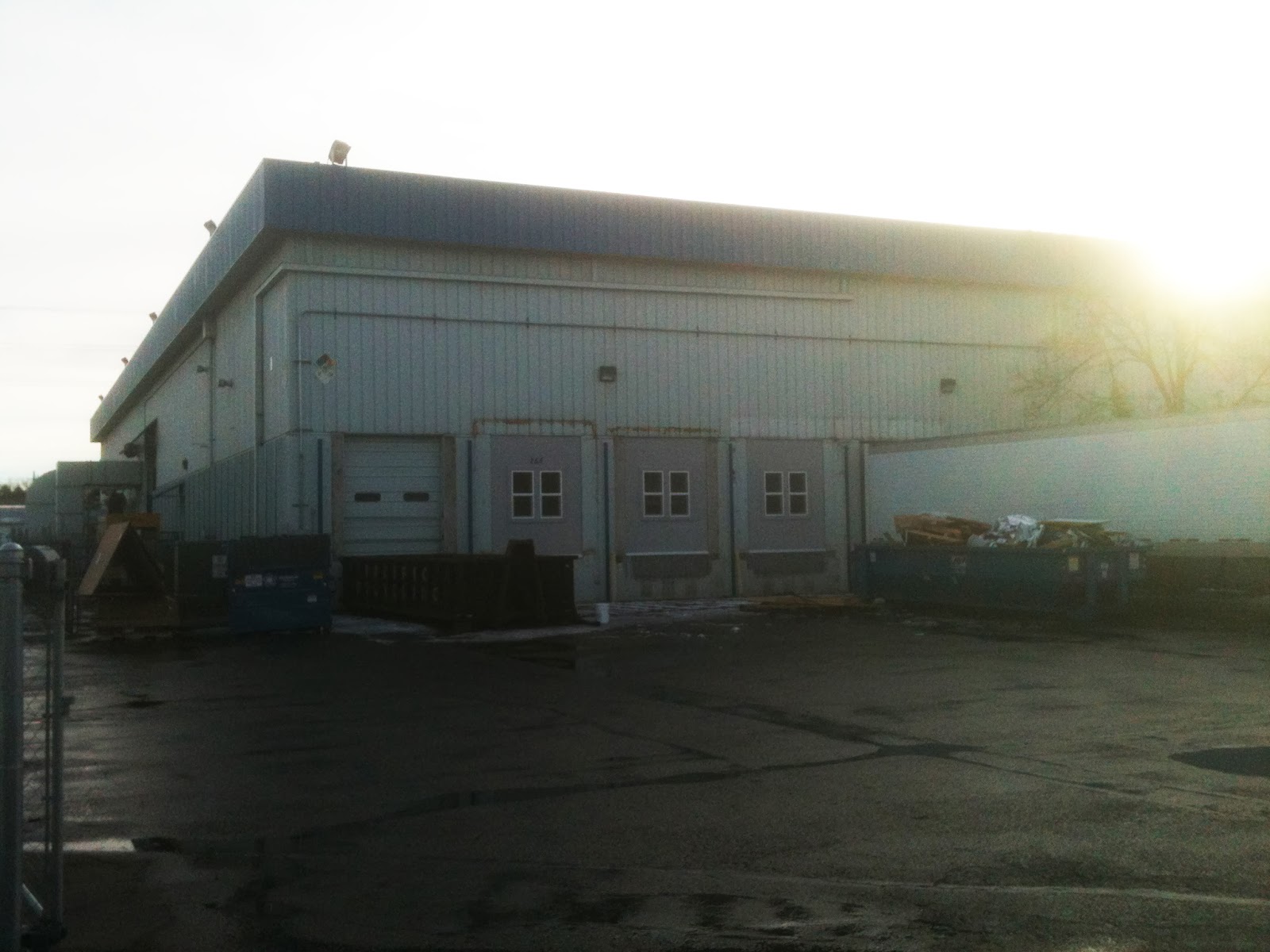 Same docks, different angle, shot in either January or February 2013. Haphazard wall cladding and slit-like vinyl-trimmed windows are the game west of Cole Road. (Please excuse the unpleasant glare, although it seems eerily fitting).
Posted by Chris Peebles at 8:48 PM No comments:

Delta A320 inbound from Newark Liberty.
Loading docks from a new vantage.
Blink and you'll miss them.
Sometimes squinting and straining are needed--
great exertion and commitment to spot a dock.
I find it pointless to simply shrug and say there are
no loading docks in the great industrial expanse
west of Salt Lake City.
I choose to accept that loading docks exist in the thousands,
even if they're not readily apparent in my
immediate perceivable surroundings. 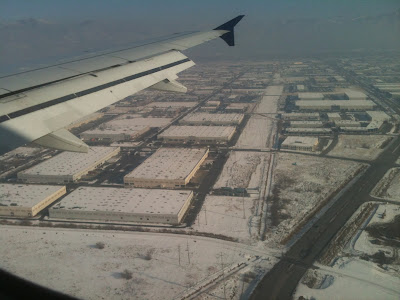 A bird's eye dock pic--hitherto unseen on The Loading Area. This time, the loading docks are minuscule in a sweeping scene marked by wintry landscape, expansive warehouse roofs and an obscured Wasatch Range. Quite a sea change from the close-cropped decontextualized docks you're accustomed to! Plus you get an airline livery-clad wingtip fence as an added bonus.

Posted by Chris Peebles at 3:35 PM No comments: 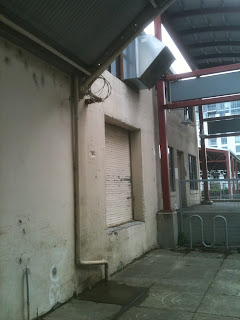 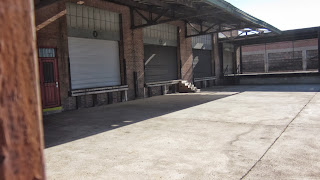 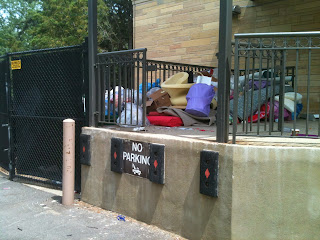 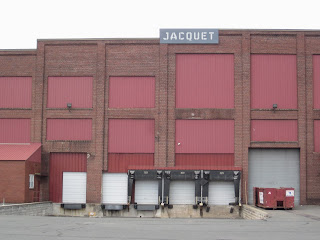 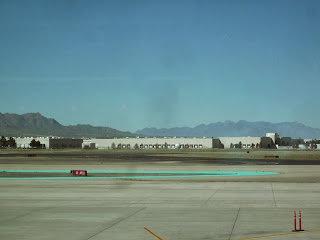 Earlier this year, while padding along a pristine sidewalk in a Central Bench industrial zone, a profound realization struck me. It's relevance and application eluded me, however. But now, after seven months of percolation, rumination and even some fermentation, a tangible product has bubbled to the surface. Upon cursory glance, it's your garden variety experimental mixed-media dock poem. But I look at it as an unclassifiable article with a consciousness unto itself. I served, perhaps, as a mere conduit to give it perceivable form in our limited plane of understanding. Regard:

A trek to "work"
A trek back "home"
And along the way
an exploration of
seams to reveal
liminal fixtures... 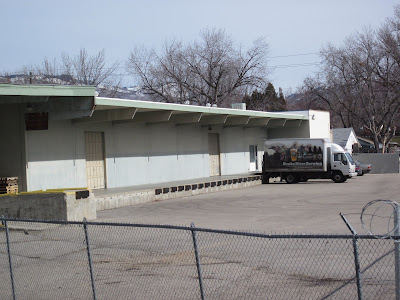 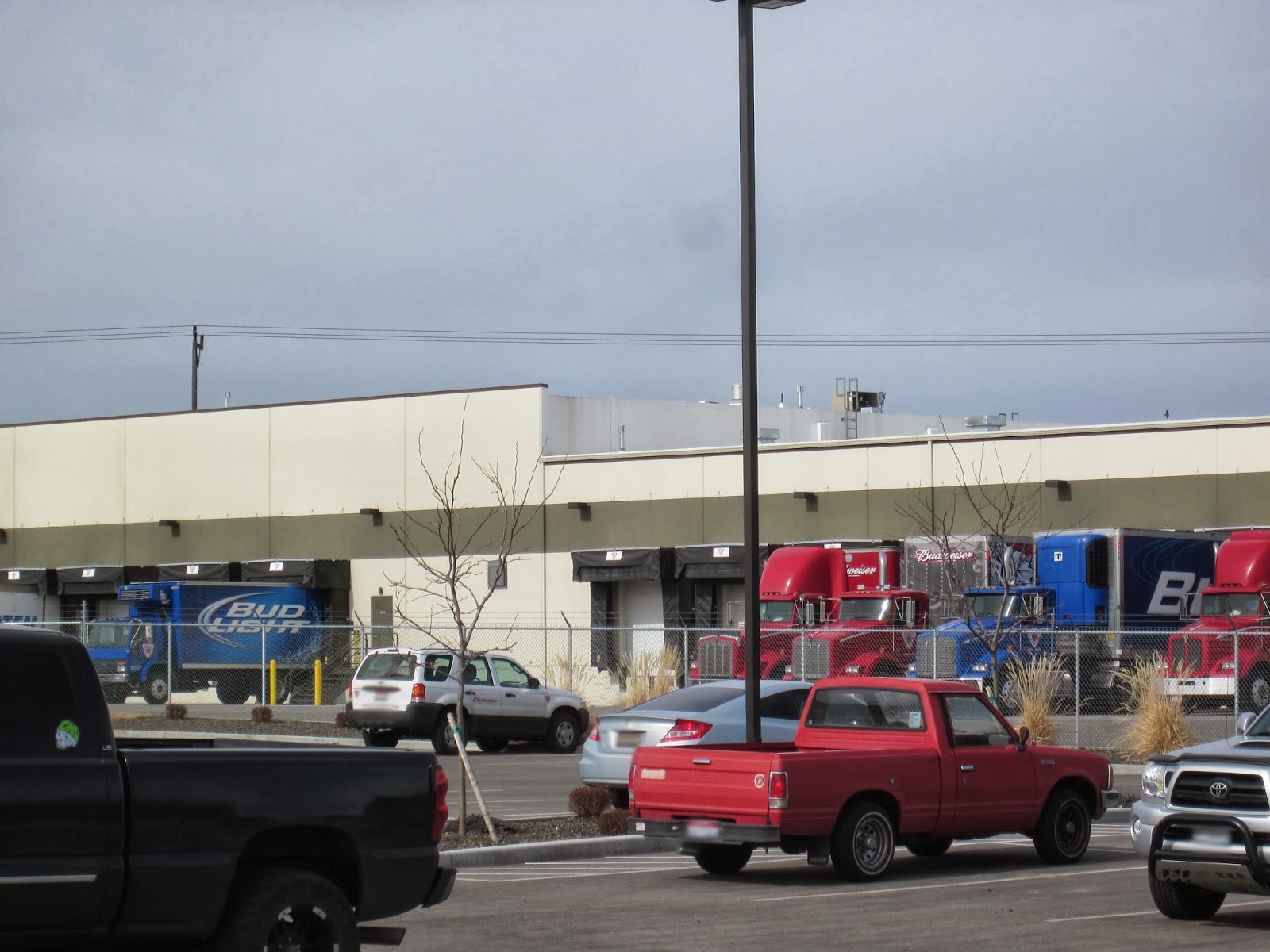 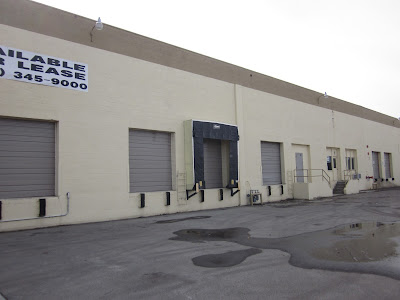 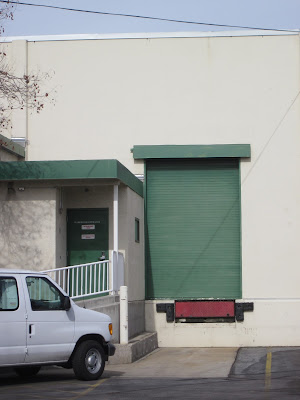 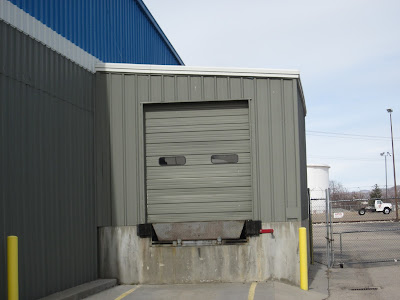 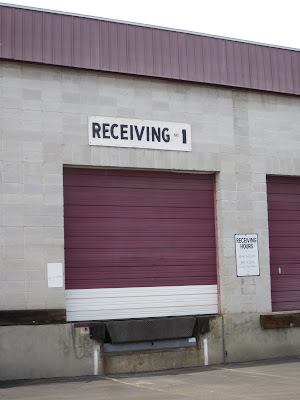 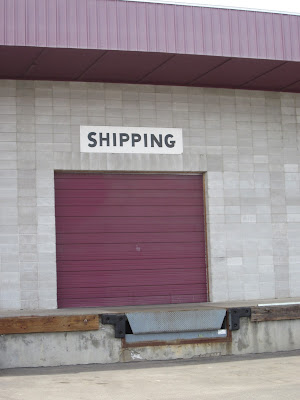 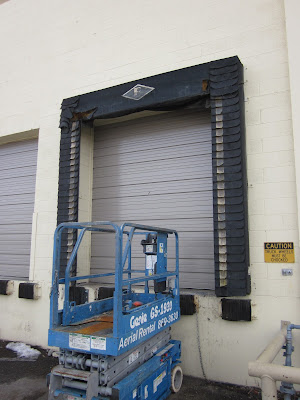 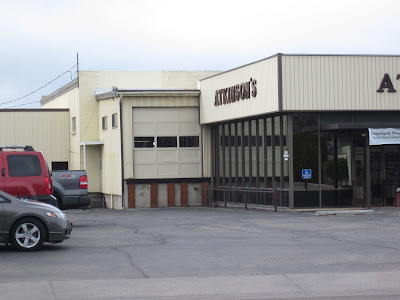 ...of unacknowledged
mettle.
Posted by Chris Peebles at 9:52 AM No comments:

While I personally believe there are infinite opportunities for discovery in even the most spatially confined settings, I will admit to a certain myopia in my unremitting exploration of loading docks. I am well aware that there is a vast uncharted universe of docks outside Boise's walls. But one needn't travel far to revel in new and exotic freight threshold experiences. Some time ago, I hit the open road and ended up in Twin Falls, Idaho several hours later. Other than being home to the scenic Shoshone Falls, a decent-sized community college and a prominent food manufacturing sector, Twin contains a historic warehouse district that is something of a de facto loading dock museum! Here are some highlights of what proved to be a fruitful and satisfying day trip: 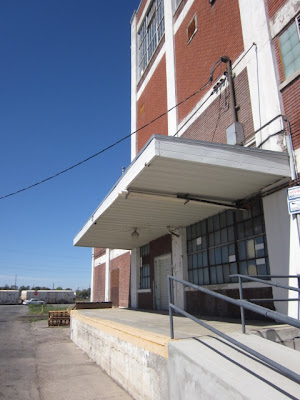 A former Swift & Company plant. In the stillness, you can almost hear the bloodcurdling cry of creatures sacrificed for that altar known as the American dinner table. Indeed, loading docks have been and continue to be complicit in dreadful practices, but on an aesthetic level, they can still be encountered in awe and fascination. 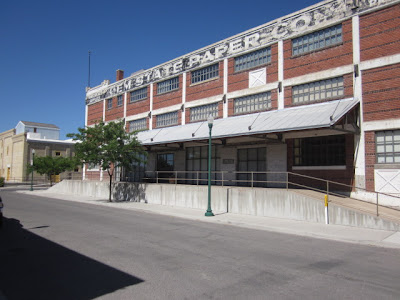 In an age of "repurposing," a handrail now dictates the movement of people, not goods, on the open dock at this old paper warehouse. When spared from the wrecking ball, a loading dock finds a way to adapt and remain relevant through the passing years. 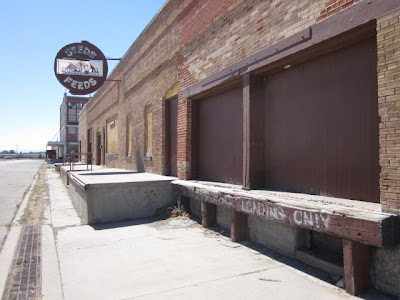 Now here's an outfit that took its docks seriously. Even in a state of disuse, honest hand-painted letters tell us in no uncertain terms the final cause of the gateway they adorn with stunning permanence and dignity. May this artifact provide a lesson in directness and respect for generations to come! 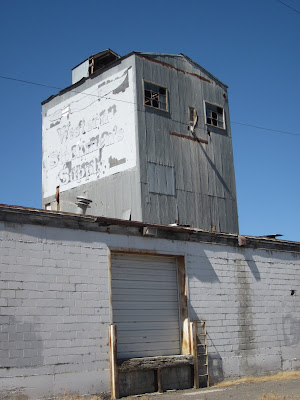 As far as juxtaposition is concerned, it doesn't get much better than loading dock with a generous splash of grain elevator. I could go on, but grain elevators deserve a dedicated blog in their own right.
Posted by Chris Peebles at 11:56 AM No comments: